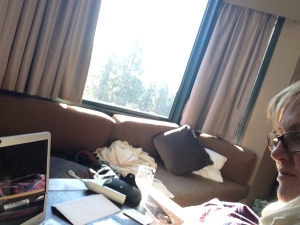 Kristin Sherman Ølnes grew up in the Southwest where she attended the University of Arizona and obtained a BFA in Cinematography.  In ’89, she moved San Francisco and worked for American Zoetrope.  Later she received an MFA in Museum Education and continued to use film as an interpretational tool for museums.

Kristin has been married to David Olnes for twenty-four years.  She and her husband have homeschooled all three of their children, K-8th grade.  They’ve also maintained an ‘urban farm’ with chickens, turkeys and honeybees, as well as many fruit trees and vegetables.

In the past few years, Kristin has been Producing and Directing short documentary films.  Her film company, Intrinsic Lifestyle Productions, focuses on Bay Area residents who are pursuing their unique interests with zeal and making a difference in the world in their own unique way.